Meet the folks behind the beer who bring a unique combination of experience and ingenuity to our brewhouse. 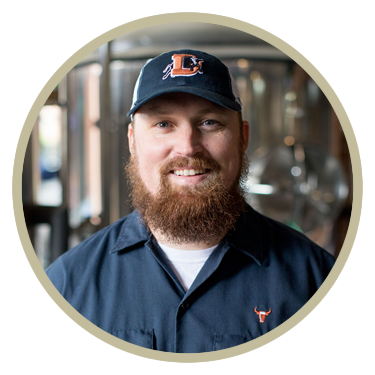 Tate grew up in Fayetteville, Georgia, a two-stoplight town in the outer suburbs of Atlanta. While he, thankfully, didn’t develop his love for beer until later, Tate has always enjoyed helping people experience life to the fullest with food, sports, and friends. In college, he had the unique opportunity to tour the Guinness plant in Dublin, Ireland. After that experience, his curiosity with beer was sparked. Tate pursued his passion for craft beer as a hobby while he taught elementary school for nine years.

After inadvertently impressing the owner of Bull Durham Beer with some of his homebrew, an offer of Head Brewer was too good to turn down. Tate loves the process of tasting, researching, and experimenting with craft beer recipes. This makes his position as Head Brewer for Bull Durham nothing less than a dream job. With fantastic people, a supportive boss, and a baseball stadium environment, what’s not to like? He, his wife, and their two children love to spend time together going to restaurants (especially Bali Hai, Bull City Burger, and Lilly’s Pizza) when dad isn’t brewing world class beer.